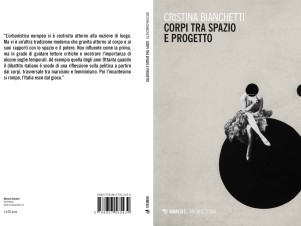 The European urban tradition has clearly addressed place as the limit to design. We cannot conceive of living and exchanging without profound roots in places. And so do architectural and urban design, they are about places.

There is another modern tradition in urbanism that gravitates around the body. Bodies are an equally important reference than places. Though not as influent, it suggests another non-mainstream approach to modern urbanism. This tradition scrutinizes what goes in between the body and space.

The book unfolds a critical reading of contemporary architectural design and urbanism, criticizing the way they considered space using the body. In doing so, it offers an intellectual journey through the debate of architecture and urban planning, and in particular the ambiguous relationship with politics.

Most of the references delve into the Italian debate of the Eighties when intellectuals and practitioners scrutinized the failure of the 900 and revise most of the modern assumptions in politics as well as in design. Each of the seven chapters of the book extracts, in fact, a crucial controversy from the heathen debates on cities that help in illuminating the outcomes of the conversation that unfolds all along the century.

From: IV. BOOKS
← Through the rooms into a diorama. Alternative domestic model to inhabit the territory
Dialoghi immunitari →
No comments yet